Site Selection is a magazine of corporate real estate strategy and economic development. In its September 2019 issue on pages 44-47, Hondo's very own Texas Aircraft was highlighted in the magazine for its selection of Hondo as its production location. The City of Hondo continues to position itself for great opportunities and a productive future. See the article (Page 44-47).

Hondo, Texas is a city in and the county seat of Medina County, Texas. Located on U.S. Highway 90 West just 41 miles west of San Antonio within the Eagle Pass, Laredo and San Antonio triangle. Since 1689, when Spanish explorer Alonso De Leon passed through, naming the Medina River and the Hondo ("deep") and Seco ("dry") Creeks on his way to East Texas, the name Hondo has been on the lips of those who passed through. From the time that San Antonio was founded in 1718, dozens of expeditions and hundreds of travelers passed through the Hondo area. The Republic of Texas fought the Mexican Army here in the 1842 Battle of the Arroyo Hondo. Established in 1881, the town was first dubbed Hondo City. A post office designated Hondo City and began operation in 1882.

Castroville was displaced as the county seat in favor of Hondo in an election on August 27, 1892. The beautiful Italian limestone courthouse was completed in 1893, built on a block of land the railroad president had donated ten years earlier for a courthouse lot. The name of the post office was changed to Hondo in 1895. The town quickly became a trade and shipping center for the area's agricultural and ranching economy. During its heyday in the early 1900's, most of the downtown business buildings were built chiefly of D'Hanis brick.

In 1930 the Hondo Lions club constructed what is now Hondo's famous landmark. The Welcome sign first read, "This is God's Country Don't Drive Thru it Like Hell." Since then it has seen a few changes including changing "thru" to "through" and adding the word "please" as to appease the passerby.

Hondo survived the depression and actually saw a bit of a boom when the town was incorporated on May 14, 1942 and then grew exponentially when the Hondo Army Airfield was built by H.B. Zachry on 3,675 acres of land in just under 90 days in Hondo.

(Below) Picture of original sign and LaVarian Schrandt taken by Robert Schrandt in 1941 while stationed at Hondo Army Airfield. 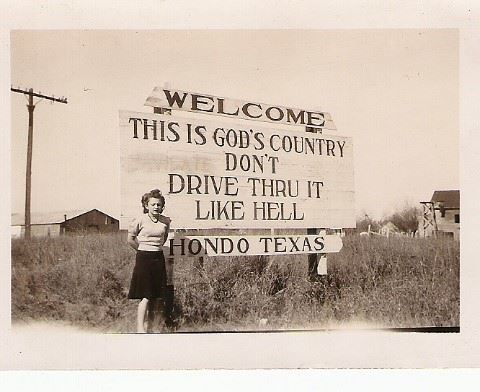